Rage Against The Machine Donates Proceeds To Charity 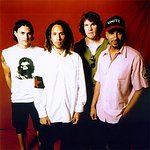 Rockers Rage Against The Machine have won the coveted Christmas Number 1 spot in the UK with a re-release of their 1992 song Killing In The Name Of, and they have agreed to give the proceeds to charity.

Over the last few weeks, the band has been involved in a close battle with X-Factor’s Joe McElderry for the highly prized Number 1 spot, and won the top ranking by over 50,000 copies.

Proceeds from the single are set to go to Youth Music – the UK’s largest children’s music charity, set up in 1999 to promote and support music making opportunities and to provide advice to children from birth–18 with the least access, including some of the UK’s most disadvantaged young people – and Shelter, a charity for the homeless.

“We are delighted that people backing this campaign are choosing to support Shelter. The money raised will go towards helping hundreds of homeless families at Christmas this year,” said Gordon MacRae, Head of External Relations at Shelter Scotland.

“Rage Against The Machine was built for moments like this,” added Rage Against The Machine’s Tom Morello. “That historic chart upset the other night is one we’re very proud to have been a part of, but more proud that it showed that people uniting in solidarity can do anything. That’s the lasting message from this. It went from being ’let’s kick The X Factor off the top of the charts’ to a real people’s movement and, in the future, the energy behind it can be used for other social justice causes and not just chart-topping.”