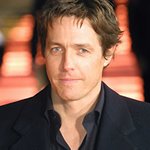 Hugh Grant has launched Marie Curie Cancer Care's Great Daffodil Appeal calling on people all over the UK to make a donation and wear a daffodil pin – the charity’s emblem – throughout March.

Hugh has supported the charity as a fundraiser and ambassador since his mother died at home in 2001, cared for by Marie Curie Nurses. The actor has made a short film to promote the appeal. The film can be viewed here.

Maria’s husband Paul died two years ago and was cared for at home by Marie Curie Nurses. She first learned about the Marie Curie Nursing Service when she heard Hugh Grant being interviewed on the radio. By this time her husband was critically ill and Maria was finding it difficult to cope on her own.

Maria said: “By 10pm that same day, we had a Marie Curie Nurse on our doorstep. The nurses were wonderful and gave some much needed emotional and practical support to all the family, allowing Paul to stay at home until he died”.

Hugh said: "Like Maria, I know from my own experience that Marie Curie Nurses provide care to terminally ill patients, allowing them to die in their own homes, which is where most of us would like to be. Marie Curie can’t deliver this service without donations from the public and I urge everyone to dig in their pockets, make a donation and wear a daffodil with pride.

“Volunteer fundraisers will be out collecting in town centres throughout March and daffodil pins can also be picked up from thousands of local stores, schools and Marie Curie shops across the UK.”

“The care we are able to provide makes such a difference to patients and their loved ones,” says Nurse Lorna in the film. “So often, we arrive in people’s homes as professionals and leave as family friends.”

The charity is hoping to raise £5 million throughout the month long UK appeal. Money raised from the appeal will provide more free nursing care for people with a terminal illness in their own homes and the charity’s hospices. For further information and to view the films, click here. 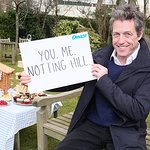 Enjoy A Picnic With Hugh Grant And Tour Notting Hill May 10, 2018

Here is your chance to enjoy a fancy picnic with Hugh Grant and tour Notting Hill. More →