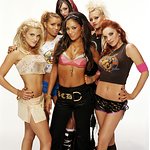 Pussycat Doll Nicole Scherzinger has dreams of starting a music camp for kids with special needs.

The pop star, inspired by her aunt who suffers from Down syndrome, hopes to team up with Los Angeles radio personality Todd Michael Krim to give disabled kids and Down syndrome youngsters a special place to sing and learn to play instruments.

Scherzinger says, “I grew up with my aunt, who is actually younger than me because my grandmother had her at an older age, and she has Down syndrome. She has always had a special place in my heart and is such a wonderful addition to our family, so when Todd asked me if I was passionate about any charities or causes, I immediately thought of her.”

“Nicole has to be one of the kindest and sweetest souls I know,” Krim told Look to the Stars, “And is as beautiful on the inside as she is on the outside.”

“I want to bring awareness to how special people with Down syndrome are…” said Nicole. “I used to tell my girls in the Pussycat Dolls that I would have my own musical camp or school where I would teach people with special disabilities or Down syndrome.”

Todd Michael Krim is the founder of Reality Cares, a 100% volunteer organization dedicated to helping the reality television community give back and raise money for non-profits. Krim also hosts the ‘Reality Cares Radio Hour’ where celebrities and special Hollywood guests discuss various ways to “give back” and “make a difference” in this ever-changing world. Schedule: Sundays, 2 to 3pm Pacific on LATalkRadio.com

While this year’s Emmy Awards had a 33% increase in Black nominees, there were still many groups who were underrepresented or not recognized at all. More →