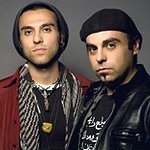 Following the footsteps of other artists who’ve used music to influence change, Toronto-based band Blurred Vision has effectively harnessed the power of the Internet to start an on-line revolution promoting peace and change for the people of Iran via their version of the iconic Pink Floyd song, ‘Another Brick in the Wall’. And it seems to be working.

Their version of the song, Another Brick In The Wall – Hey Ayatollah Leave Those Kids Alone, has garnered international attention, earning them a nomination for Best Music Video at the Soho Shorts Film Festival In London. And with 60% of the population in Iran under the age of 30, Blurred Vision have essentially become the voice of a generation pleading for help.

Look to the Stars was pleased to speak with Sepp from Blurred Vision. He, along with his Iran-born brother Sohl, use only their first names in order to protect family in Iran – family whom they haven’t seen in about twenty years.

Sepp, you mentioned in a recent interview that Roger Waters relayed to you that if other bands want to use this song in the same manner, they need YOUR permission, essentially making you the ‘gatekeepers’ of the song?

Yeah, essentially I guess we are the gatekeepers! What Roger was trying to say was not only am I giving my blessing for this song to be released, but from here on in its yours and anyone who wants to do anything with this version of ‘Another Brick in the Wall’ has to come to us. It’s beyond an honor, and Roger Waters is a huge hero to us.

Were you looking for a song to represent what was going on in Iran and or did it just hit you?

You know, this song hit us like a brick – pardon the pun. We were playing a show in Toronto and decided in the spur of the moment to do ‘Another Brick in the Wall’, as we got to the chorus I thought, why don’t I sing ‘Hey Ayatollah’ – it makes perfect sense to what’s going on there. Immediately I sang it and everyone went ballistic, everybody loved it. For Sohl and I, we knew right away this has to be it, this is the song that is going to send shock waves around the world and make an impact in the way we can raise awareness for what those heroic youth are doing over there and keep their voice alive, keep their fight alive.

Once awareness has been raised, once we are informed of the basic human rights violations and hear the cry for help from the youth in Iran, what can WE do now?

The Islamic Republic of Iran have had their grip on that country for thirty years, they completely banned everything – media, music, and all the things that give us relation to one another, brings us closer to one another. So after all these years, we are finally starting to break down that wall using music to do it – and I think that in itself is monumental because the discussion has begun again. What’s happening online right now, the way people are responding to this, it’s so hopeful to see that – so many people from around the world, from every corner of the globe have stood behind it and said we stand behind these kids and we will be their voice on the outside. And that’s what the youth of Iran have been shouting for all this time – let us know that you on the outside can hear us and we will carry on with this fight.

You said that the regime has blocked Internet access, but you’ve found a way to break through this blockade?

Yes, Haystack is an invention of a 24-year-old I.T. guru in San Franscisco. When he saw what was happening during last year’s election in Iran, he couldn’t take it and thought “well, I’m just going to do what I can to help”. For him it was I.T. and oddly enough, one of the biggest tools in Iran to have is access to Internet. The regime knew this, so they completely shut down Internet and put on these blockades. Haystack completely opens up this barrier.

So do the people of Iran now have Internet access?

Slowly they are gaining access. Because Haystack is a new thing, they needed the funds to get the flashsticks over to Iran – everything has been done covertly, passing them through cameras and people taking it in their luggage. It’s very slow, we’re trying to build on that momentum – not in a way where we turn to governments for help, we want to do this on a grassroots level with humanity. That’s our main goal, because one of the scariest things we are hearing are the war bells ringing again. If a war were to break out with Iran, all our hopes of changing the Middle East, our dreams of bringing peace to the Middle East and the World, will fade away.

People are risking their lives to report human rights violations in Iran?

Yeah, the media’s coverage on Iran and the election only lasted about a month, before it suddenly went silent. But now, what we are seeing coming through online sources and activism on the street is that people are risking their life to get this information out. There was brutality – from what we were actually seeing coming through – at the beginning of the election and uprising. The regime had free reign, they were going in house to house, gathering kids, going into universities – and now we hearing reports about thousands that have been tortured, hundreds who have been executed, woman being raped in prisons, it’s a catastrophic situation.

While the focus remains elsewhere?

And this is what really angers and disappoints us, the world leaders of the West, the leaders who hold what’s dear in our hearts – Democracy and Human Rights – they continue to focus on nuclear ambition. For us, it was a matter of “well, if the nuclear ambition of this regime is so scary and you want to end it, why aren’t they focusing on human rights and putting sanctions on that level?” This is what is going to bring people together. The nuclear ambition thing is a grey area – human rights has no grey area. There is no “both sides”. We know how bad their record is when it comes to human rights and I think a lot more people would get behind it if we did focus on that level.

Power to the People?

Absolutely! Sohl and I have been reiterating the statement that we must not forget – especially now in the 21st Century – how much humanity really has when we unite together. What we can do and achieve when we stand behind each other, it’s remarkable.

With the Internet, can change happen much more quickly than ever before?

It’s really sped it up. I always think to myself, can you imagine if the Internet was around at the time of one of our great heroes, John Lennon? The things he would have been doing and achieving – what he did was unite the world, but it would have been ten-fold and now that we have all this opportunity and access to one another it seems like we’re stepping away from those sorts of things. For us, our focus is really that this tool of celebrity and fame and music and art is such a powerful entity. Use it. You can gather the world leaders together and it doesn’t come close to what an individual in the public eye and spotlight can do in this world to create change.

You have a lot of great original songs as well as this remake, any plans to transform another iconic song into a movement?

Not at this time. This was really a one-off for us. We wanted to get this message out and we knew that this would be the song that stands on its own and hopefully, when this regime changes, when freedom and hope and democracy comes to Iran, we will have no reason to ever play this song again because essentially we will have achieved what we set out to achieve… what we have is a clear possibility of really making a change and all we have to do is support these kids, support the youth, and they will carry on.

Look to the Stars and this writer in particular thank Blurred Vision for their remarkable humanitarian efforts and taking the time to speak with us. Rock on boys, you’re making a difference! You can watch Blurred Vision’s video for Another Brick in the Wall here. You can also find out more on their Facebook page.