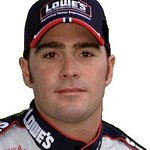 NASCAR hero Jimmie Johnson and has teamed up with Samsung and Lowe’s for the Helmet of Hope contest, asking fans and the media to nominate their favorite charity to receive a $10,000 grant.

Here’s how it works: For six consecutive Sprint Cup races, Johnson – who established the Jimmie Johnson Foundation – will select two charities that focus on children, one from fan submissions and one from media submissions. The chosen charities’ logos will be added to Johnson’s helmet for the Pepsi 400.

“Giving away my helmet has a special meaning for me,” Johnson said last week when discussing his charity work, “When I was 15 years old, the team I drove for would take the drivers to visit sick children in local hospitals to hand out stickers and spend time with them. It was a great experience for the kids that were in really difficult situations. It was rewarding to be able to leave a smile on their face.”

The Helmet of Hope program was launched in 2008 to give fans and media members across the country the opportunity to nominate their charity of choice to be featured on Jimmie’s Helmet of Hope for the Pepsi 400 race at Auto Club Speedway in Fontana, California. 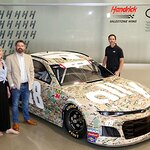