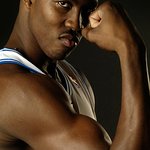 Kay Kellogg has Stage 3 Multiple Myeloma, an aggressive cancer that searches out and destroys the blood plasma in the bone marrow. Her disease is inoperable and incurable, and this inspiring woman asked for one thing before her death – a nice conversation with her hero, NBA star Dwight Howard.

“Dwight Howard is just such a precious, wonderful kid,” she says. “Whenever I watch him play, he just makes me feel good inside.”

Despite living on a fixed income, she decided to treat herself to Magic season tickets in the upper level, showing up at nearly every game wearing her blue No. 12 Dwight jersey.

“I was sitting way up in the cheap seats,” she says, “but I felt like I was in heaven.”

A few weeks ago, her daughter had an idea. She contacted the Magic and told them that her mother had but one wish before she died: She wanted to meet Dwight.

And, so, a few days ago, Dwight showed up at her door step. He was supposed to spend 30 minutes and ended up staying nearly two hours.

“He has become my 7- foot-tall bottle of medicine,” Kay said.

Members of the Marley family will reimagine the late Bob Marley's iconic anthem One Love to support UNICEF's work to reimagine a fairer, more just world for children whose lives have been upended by the COVID-19 pandemic. More →
More news →