See Powderfinger In Mid-Air For Charity! 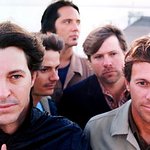 Jetstar, Australia’s low fares airline, is offering the best in-flight entertainment music fans could wish for, with Aussie rock icons Powderfinger set to perform one show on their ‘Sunsets’ farewell tour at 30,000 feet!

Powderfinger and Jetstar came up with the idea of a once-in-a-lifetime mid-air performance after tickets to Powderfinger’s Sunset’s farewell tour sold out almost immediately in most cities. The special concert will raise money for Powderfinger and Jetstar’s chosen charities, each supporting disadvantaged children – Yalari, a charity that offers indigenous children in Australia the chance of a secondary education, and World Vision through the StarKids Program.

The mid-air gig will take off from Sydney on Thursday, October 28 and land in the Gold Coast.

Fans can bid on eBay for a Powderfinger Sunsets In-Flight Charity Performance package, which includes return airfares from Sydney to the Gold Coast on Powderfinger’s official aircraft, Powderfinger’s ONLY mid-air performance, a VIP lounge party with the band and a signed ‘Golden Rule’ CD.

“With so many Australian fans wishing to farewell their much loved music icons, Jetstar and Powderfinger have created the ultimate experience for fans with a chance to be part of a truly unique intimate performance,” Mr Koczkar said.

Jetstar is a major partner of Powderfinger’s Sunsets Farewell Tour this September, October and November. The Sunsets In-Flight Charity Performance will be hosted on the Powderfinger tour jet which will transport the group for much of the tour.

Bidding for Powderfinger Sunsets In-Flight Charity Performance packages opens at 10am (AEST) on Monday 27 September starting at $249 per seat. Limited seats are available. All proceeds from the auction will be split 50/50 and passed onto Yalari and Wold Vision.

For more information on the Powderfinger Sunsets In-Flight Charity Performance packages or to bid, click here.