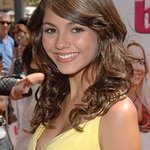 Teen actress and singer Victoria Justice announced today that she will join the United Nations Foundation's Girl Up campaign in its mission to educate, protect and empower girls in developing countries. In her role as a Girl Up Champion, Victoria will help inspire other teens to get involved and take action for girls around the world.

A “for girls, by girls” campaign, Girl Up mobilizes the energy and compassion of American girls to help raise funds and awareness for UN programs that provide girls in developing countries with basic needs like access to school supplies, clean water, life-saving health services, safety from violence and more.

“I’m so excited to become a Champion for Girl Up and to help make a difference for girls who aren’t given the same opportunities that most of us take for granted,” said Victoria. “I know that there are plenty of girls throughout the country who are just like me – ready and motivated to stand up for the rights and well-being of girls in the developing world. I am confident that, together, we will rise to the challenge.”

Victoria will join Girl Up on September 30, 2010 for the campaign’s official launch in New York City and will go on to support the “Unite for Girls” tour, which travels to cities across the U.S. to activate and engage teens from coast to coast. Victoria will also have the chance to visit Girl Up supported programs in developing countries to observe first-hand the impact they can have on girls and communities.

“We are so excited to have Victoria join us as a Champion for Girl Up and know that she will make a tremendous contribution to the campaign,” said Kimberly Perry, director of the UN Foundation’s Girl Up campaign. “We began this effort for the millions of adolescent girls who need our voice; but it is only through the energy and involvement of young leaders like Victoria that we are able to create real change for girls around the world.”

Victoria joins Lisa Masterson and Queen Rania Al Abdullah as an ambassador for the campaign.