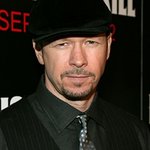 Donnie Wahlberg joined players from the New England Patriots and more than 200 volunteers for a day of service at the Waltham Boys & Girls Club as part of a larger effort within the Entertainment Industry Foundation's “iParticipate” and United Healthcare’s (UHC) “Do Good. Live Well.” campaigns on Tuesday, October 26.

The playground will support the Waltham Boys & Girls Club's mission of encouraging the local young people who use the Club – nearly 3,700 annually, many of them from disadvantaged families – to engage in positive play, and lead healthy, productive and responsible lives.

The new playground will provide 275 children served every day at the Club with a place to play. Children attending the Club have never had a playground to call their own and enjoy.

With recent reports indicating that volunteering is good for your health, the “Do Good. Live Well.” campaign is collaborating with the EIF iParticipate campaign to help launch a new era of service and inspire more people to volunteer. More than 73 percent of UnitedHealthcare employees currently volunteer to help others.

The New England Patriots Charitable Foundation is supporting the “Do Good. Live Well.” mission and partnering with UnitedHealthcare throughout the year to help Patriots fans live healthier lives.