By Maxine Tatlonghari on December 6, 2010 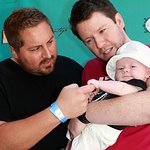 LookToThe Stars.org’s Hollywood Insider Maxine Tatlonghari was able to chat with The Guncles – aka Scout Masterson and Bill Horn – during their first opportunity to support charity since they have had their hands full with a new baby of their own, gorgeous Simone Lynn Masterson Horn!

The Guncles were at the WE CAN Community-wide Food Drive benefiting the Burbank Temporary Aid Center co-hosted by Ali Landry and Yum! Brands on November 16, 2010 at the Burbank Boys and Girls Club.

What brought the two of you out today?

We’re really excited about the work that the organization is doing and Ali is a friend of ours so we are always happy to come and see her. We have my mother here in town and she was able to stay with our little one – who is six months old – which allowed us a little time to give back which we love doing.

I know that children’s issues are very important to both of you … are there any other causes that you are involved with?

We really like to get involved with a lot of different causes. It’s been a little more difficult over the last six months with a newborn, so this was our first step back out in helping out in the community. A few months ago we volunteered with Lamda Legal, which is a gay rights legal organization… and we worked with them on their big awards ceremony a couple of months ago. That was kind of tough, I think at that point our little one was only three months old…

Did you have family help at that time too?

Yes, lots of emails … lots of conference calls. Technology really allows very busy people, including new parents like us, to continue to support the causes they care about! Finding a good babysitter and praying they don’t cancel at the last minute, especially the night of the ceremony. So much of that was riding on us and we took it very seriously.

I know that Ali has become very involved with the children’s car seat issue …and proper installation … how important is that to you?

Yes, I was going to take that course with her but unfortunately I wasn’t able to …

I know, I heard! It was quite a commitment … five days long, especially with a newborn!

Yes, it was a 40-hour week. But we did send her an e-mail asking her to help us when we have to change our child’s car seat. I’m so glad she took that because when we were looking for our additional car, which is a Prius, we learned that it’s a little hard to be fitted with a car seat. We actually called all the police stations within a 40-mile radius, and they weren’t able to do it at that time. So luckily, Ali took the course and now we have someone that we know and trust that can help us with this.