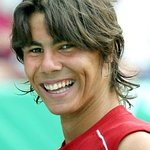 Nadal suffered a defeat to Federer in their opening clash in Zurich. The match, dubbed “Match for Africa,” raised funds for the Roger Federer Foundation.

“The focus is just solely on two players and one match,” Federer said after the match. “There was quite a pressure going into a match like this, but at the end of the day, it’s so not important who won the match tonight. It was a match for Africa, this money is going to go to a good cause — for my foundation, for kids in Africa — so I’m so proud and so happy that we all made it work, so thanks again to everybody.”

Wednesday’s rematch in the Spanish capital Madrid – “Joining Forces for the Benefit of Children” – will be played for Nadal’s charity.

“It’ll be very exciting for me and very emotional for me also,” Spaniard Nadal told the ATP World Tour website. “We never played together in Switzerland before but in Madrid it’s going to be the third time. We’re going to be 1-1, he beat me in 2009, and I beat him in 2010, so it’s going to be a decisive moment.”

Additionally, Nadal made a special announcement to his fans on Facebook: “Hello everyone. You know I don´t use Facebook for anything commercial, but this time I think it is worth it,” reads his status update, “You will able to buy pieces of the court where Roger and I will play on Wednesday. The money will go to the kids and this will be another way to help.”