Saving Abel Plays For The Troops 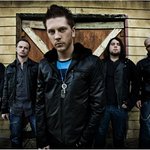 Rockers Saving Abel kicked off their three-month summer tour with troops and their families stationed in Guantanamo Bay, Cuba, where they visited and performed as part of a USO tour June 23-26.

The rockers from Corinth, Miss., have been together since 2004 and have become eager USO entertainers since their first USO performance in Feb. 2010, when the guys traveled to Iraq and Kuwait for an eight-day tour. They also performed a free concert last April at Fort Carson, Colo., for troops, their families and the general public.

“We can’t believe it has been more than a year since our last USO tour,” said Saving Abel front man Jared Weeks. “Anytime we get the chance to perform for our men and women in uniform, and their families, we jump at the opportunity. Guantanamo Bay, Cuba … here we come.”

The band released their newest album, “Miss America” in June 2010 and dedicated the same-titled single to the service men and women and their families.

In honor of its 80th anniversary, the United Service Organization (USO) has named country singer and actress Kellie Pickler, and producer, actor and activist Wilmer Valderrama as USO Global Ambassadors. USO tour veterans Pickler and Valderrama will help lead the effort for Americans, united in spirit and action, to give more than thanks to the military community. More →