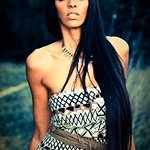 British actress Judi Shekoni – who rose to fame in the role of Precious in UK soap Eastenders and will soon be seen as Zafrina, leader of the Amazon coven, in the upcoming conclusion to the Twilight films – has thrown her support behind a campaign in Britain aimed at encouraging young people to vote.

Judi wanted to get behind the Bite the Ballot Campaign to encourage young people to learn about politics, share their own voice and use their vote. Politics affects what we do every single day, so making your own choices and knowing what your options are is essential, even from the very first vote! This campaign was founded by fellow actor Michael Sani and breaks the barriers to let you know that politics can be simple, personal and fun. It also follows in the footsteps of the American campaign Rock the Vote which saw a huge increase in young people voting for the first time.

The ‘Bite the Ballot’ campaign focuses on one main idea, which is to give voice to young people. At the last General election 60% of them failed to vote. Bite The Ballot was created by young people for young people in an attempt to unite them using Politics. To make them believe in the power of their voice and to know that one vote can count.

There are no Political ties, just the message that democracy would benefit from the engagement of first time voters and younger people in general. A chance to demonstrate that we do not all have to agree and when we don’t we can voice our opinion without it resulting in someone being stabbed.

To find out more, visit www.BiteTheBallot.co.uk.

A powerhouse lineup of artists, activists, influencers and elected officials will kick off Democracy Summer 2020, the effort led by Rock the Vote in partnership with Voto Latino Foundation, When We All Vote, March For Our Lives and many more, to register and mobilize 200,000 new voters over the summer, at a virtual event on Thursday, June 18th. More →