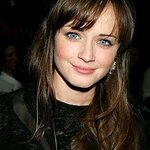 Gilmour Girls actress Alexis Bledel will be in Times Square, NYC, today for a very special event with Save the Children.

On September 19, 2011, Save the Children, NGO partners, and hundreds of people will gather in Times Square to watch a human mosaic create an image of a health worker and child. Save the Children is calling for millions more life-saving health workers in the poorest countries as the UN General Assembly begins. They are promoting the Health Workers Count campaign.

Health workers are everyday heroes – they save lives. 350 million children never see a health worker in their lives so millions of children die every year from easily treatable conditions such as such as pneumonia and diarrhoea. Save the Children and other organizations are working together to change this.

World leaders need to use the UN General Assembly in New York this week to make new, substantial and specific commitments to expand the number of health workers and better support those workers already in place.

Carolyn Miles, CEO at Save the Children said:
“It is simply not acceptable for a child to die because a midwife or a nurse is out of reach. Training health workers is simple and inexpensive, yet their impact is immeasurable. Hundreds of children’s lives will be saved by the vaccinations a health worker administers, or by the trained help they can give to pregnant mothers.

“World leaders must put an end to this scandal and ensure that all children, regardless of where there are born, are able to see a health worker when they need it the most.

“Both rich and poor countries must put health workers at the top of their agenda. With more money to train urgently-needed nurses, midwives and community health workers around the world, we will save millions of children’s lives.”