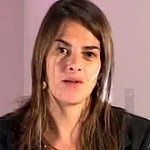 Leading names from the worlds of contemporary art, design, fashion and film donated a record 2,900 postcard size artworks to the Royal College of Arts annual RCA Secret event, which culminated in a massive sale in London in the weekend.

All postcards were made and donated by professional artists, designers and illustrators, plus up-and-coming students and graduates from the RCA. The event is now in its eighteenth year and has raised over £1 million for the RCA Fine Art Student Award Fund, which helps Fine Art students with bursaries towards tuition fees and material costs for graduate shows.

Although it helped to know the difference between a drawing by Tracey Emin and a sketch by Grayson Perry, a lot of it was down to pure luck and many collectors didn’t realise whose work they had chosen until they handed over their cash on the sale day.

“We are enormously grateful to all of the artists who have donated postcards this year, making it the biggest event we have ever staged,” said the collection’s curator Wilhelmina Bunn. “As future funding for art education is likely to be reduced, it’s encouraging that established artists and designers are willing to help support a new generation of students.”