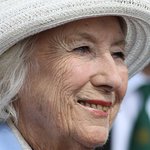 Beloved by British troops for her outdoor concerts during World War II, Dame Vera Lynn now has a whole new flock of fans after penning a letter on behalf of PETA UK to Beverley Aspinall, managing director of Fortnum & Mason, asking her to stop the sale of the vile food product foie gras in the store.

In the letter, Dame Vera – who has long expressed her affinity for birds in lyrics such as those in the songs “(There’ll Be Bluebirds Over) The White Cliffs of Dover” and “A Nightingale Sang in Berkeley Square” – explains that foie gras production is so cruel that it’s banned in the UK.

“Britain has many things it can be proud of, and I consider our respect for the welfare of animals to be of them,” she wrote. "I was therefore most upset to learn that Fortnum & Mason stocks foie gras – a product so cruel that its production is not allowed in the UK, and yet you continue to import it from France. There is no way to produce foie gras humanely, and the force feeding process is universally condemned by veterinarians, scientists and animal welfare groups. For a department store with such a proud British heritage, it made me sad that you would wish to tarnish it by associating yourself with the force-feeding of animals.

“Please assure me that you will spare geese and ducks the trauma of force-feeding by pledging to end the sale of foie gras at Fortnum & Mason.”