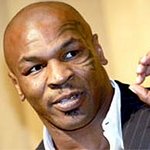 Former world heavyweight champion turned acclaimed entertainer and devoted family man, Mike Tyson is giving back to the community with the launch of his charity, Mike Tyson Cares Foundation.

The charity, whose mission is to “give kids a fighting chance” by offering innovative centers that provide for the comprehensive needs of children from broken homes, will kick off with a star-studded gala at Las Vegas hotspot TABU on December 7th, 2012. Proceeds from the event will benefit the Shade Tree Foundation as well as Awakenings both of which benefit needy and at-risk children in the Las Vegas area.

Mike, who has had stunning success as an entertainer in recent years both in the “The Hangover” series and with his critically acclaimed, one-man show, “Mike Tyson: Undisputed Truth” currently resides in Las Vegas with his wife and children, and is thrilled to give back to the community that he calls home.

“I am very proud to launch Mike Tyson Cares Foundation,” said Tyson. “I want my legacy to be about charity and helping children. This is my start.”

The Mike Tyson Cares Foundation launch event goes from 7pm-10pm at Tabu in Las Vegas ’ MGM Grand. Media check in is at 6:30 and red carpet arrivals are from 7pm-8pm. To purchase your tickets, click here.

To further benefit Mike Tyson Cares, Mike is also auctioning off the once-in-a-lifetime chance to sit ringside with him at the December 8, 2012 Pacquiao vs. Marquez Fight in Las Vegas on CharityBuzz.com. Proceeds from the auction will go directly to the charity. To bid, click here.

SiriusXM has announced its participation with WhyHunger's Hungerthon 2014. More →