Sophia Hayat - Be Sweet To Bunnies 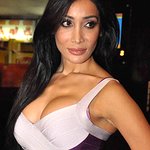 Popping out of a cake, looking like a sexy bunny and holding a placard that read, “Be Sweet to Bunnies: Choose Cruelty-Free Cosmetics”, Sofia Hayat – the former Zee TV host–turned-actor, whose latest film is Diary of a Butterfly – appeared in a pristine white swimsuit with bunny ears and a fluffy tail on Thursday.

She organized her birthday party at a hotel in Mumbai to draw attention to a very serious issue close to her heart – the testing of cosmetics on animals. Hayat’s and PETA India’s point? That testing cosmetics on rabbits and other animals is harmful and usually deadly to the animals, in addition to being bad science – and the Indian Ministry of Health & Family Welfare should ban it.

“There’s nothing sweet about harming rabbits and poisoning rats for lipsticks and eye shadow”, says Hayat. “Today, there are many top-quality, cruelty-free cosmetics companies to choose from – there’s no reason to buy from old-fashioned companies that still test on animals.”

PETA India is calling on the Indian government to implement a ban on the sale cosmetics tested on animals similar to the ban scheduled to take effect in the European Union in 2013. The ban has driven the development of non-animal testing methods, which can replace the use of animals in cosmetics testing and many other forms of product safety testing. The replacement of animal tests has already saved hundreds of thousands of animals, and many more can be saved as new techniques are developed and validated.

More than 1,300 companies around the world have banned all animal tests, but many still choose to subject animals to painful tests in which substances are smeared on their skin, sprayed in their faces or forced down their throats. Because of the vast physiological differences between humans and the animals used in these tests, the results are often misleading.