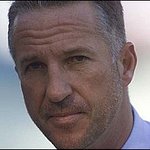 Former English cricket captain Sir Ian Botham has been awarded an honorary degree for his sporting feats and his charity work.

The 52-year-old cricket legend received the degree at the Leeds Metropolitan University, where British Lions rugby coach Ian McGeechan praised him for his charity fundraising walks which have netted over £5 million (US$10 million) for Leukaemia Research, an organization that helps children with the disease. Botham has led 11 long-distance walks to raise money for the foundation, which he was inspired to start in 1985 when he had to visit a Taunton hospital for treatment on a broken toe. During his stay at the hospital, the batsman was shocked into action when he stumbled into a children’s ward and witnessed the suffering of patients with leukaemia.

Since then, the chances of survival for a child with leukaemia has risen from 20% to 80%.

“That is remarkable in such a short period of time,” he said during last week’s ceremony. “If we can and we are able to defeat leukaemia…just think how many doors that could open for other forms of cancer, and that’s what keeps us going.”

Botham will launch another charity walk in October, when he will make his way around a series of UK cities. More information can be found at www.bothamwalk.com.