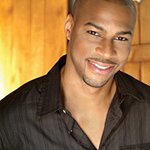 For this week’s Honeys We Love column, Look to the Stars contributor Delinda Lombardo caught up with comedian/actor/writer Finesse Mitchell in an effort to pick his brain about gender equality, dating advice and inspiration.

Aside from entertaining fans around the world as a regular on Saturday Night Live (2003-2006), he recently penned his first ‘dating advice’ book Your Girlfriends Only Know So Much and also dishes out honest relationship advice in Essence magazine. Mitchell has also appeared in such films as Mad Money, Who’s Your Caddy and The Comebacks, and proves that there are some mighty fine men out there who are more than willing to help women get along with each other while not dating “crazy.”

Finesse, tell me a little bit about the inspiration behind your column in Essence Magazine? You seem to be giving some great dating advice to women?

At first I think my aspiration was “this will be fun”, an opportunity to get some stuff off my chest, as well as talk to some other guys and figure out what they want to say and tell women, because it’s so hard – in my opinion – to communicate honestly with women. Sometimes we have such a hard time communicating how we feel to people we really love and care about because either they can’t take it or we’re afraid we’re going to hurt their feelings. So I figured it would be fun to be that guy, the one to shoot it straight from the hip and make you laugh at the same time. But you also get something from the advice; women will enjoy hearing it from a man more so than their girlfriends telling them something.

Was that also the idea behind your book ‘Your Girlfriends Only Know So Much’?

There seems to be a lot of cattiness when it comes to women getting along with each other. What can we do to combat this? Where does it come from?

There are so many women who make it blatantly obvious they are intimidated or feel insecure or don’t know how to communicate with other beautiful women – so much so that the other woman is automatically the enemy and it becomes a competition now. I’m talking about women who give other women the evil eye when they walk in the room – that’s a huge turn off for men, not just because it’s a jealously trait, but because it shows insecurity about yourself. I think that’s a problem when it comes to a person’s personality and communicating with people in general. Men who have anything going for themselves attract all types of women, so they want a women at their side that can handle a room, that can handle interacting with other women they don’t know – women of different ages or races.

Which women in your life have been the most influential and why?

My mother, just because she was my kindergarten teacher and she stressed on me the importance of education and prioritizing – [she] changed my entire life. Also, the women I’ve dated from my college years up until now, all those women were very special because they helped create the personality that I have now. Sometimes relationships don’t work out just because of timing or you’re too young, but once you get it, you get it. You can get it and be really bitter because someone broke your heart, or you can date a woman and leave the experience with ‘you know what, I know what I did wrong’, and you’re a better person for it. And those are the women you still want to be friends with to this day and recognize that even if you don’t want to date them, you learned a lot from that relationship.

Who do you currently feel is a good role model for young women to look up to?

Raven Symone. She’s perfect. I mean, she has ten times more money than some of the other girls on the scene right now, and you never hear about her getting in trouble. And Scarlett Johansson, I think she’s great.

Are there any male celebrities, aside from yourself, that you feel are making a positive impact?

Different people can know the same person but know him in a different capacity. Now, I love Chris Webber and there are things I personally know about him and there are things I don’t know. But, what I do know and love about him is who has a bigger heart – so, when you see somebody that talented and serious about giving back, the point is, he’s doing it. It’s a huge example for everybody who is in the league (NBA) making that kind of money or any entertainer that has that type of popularity – or every business person – they can really look at somebody like Chris and say, ‘what am I doing, I have just as much money, what can I do?,’ so I think he inspires people that way.

What is the one talent you would most like to have?

My relationship, because I’m putting so much into it. I really believe in it and it’s changed my whole life. So I guess my most treasured possession right now is the woman I’m dating because if something happened to her I would go crazy.

You must have some guilty pleasures?

Poker. And I love to watch the news. I’m fascinated with the election this year. I’m always watching people, whether it’s for work or if I’m just interested, I like to surround myself with positive people.

Speaking of politics, if you were President of the United States, who are the three women you would insist on running the Oval Office with you?

If Nike were to produce a Finesse Mitchell Signature shoe, what would it be called?

They would call my shoe the ‘Equalizer,’ because I’m on the same level as everybody else and we are all equal.

To find out more about Finesse Mitchell, visit www.athlebrities.com.