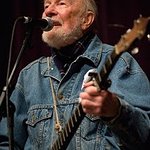 The Tulsa-based Woody Guthrie Center and the L.A.-based GRAMMY Museum will move forward with their plans to celebrate the late American folk singer Pete Seeger with the first ever Woody Guthrie Prize during an event Saturday, Feb. 22 at the Peter Norton Symphony Space in New York City.

The event and award presentation will serve as a celebration of Seeger’s musical legacy, as well as his connection to Guthrie and his work. Seeger was scheduled to accept the award and perform at the event before his passing on Jan. 27.

“The only thing I know for certain is that Pete would want us to gather together and make some music,” said Nora Guthrie, daughter of Woody Guthrie. “The power of song, as he constantly reminded us, can take us through everything that life, and death, throws at us. On Feb. 22nd, we won’t take a moment of silence to remember him. We will take all the moments to sing – as loudly and with as many harmonies as we can muster. If Pete heard we were going to honor him by not singing, he would be furious! If you love Pete, how can you keep from singing!”

Previously planned musical performances at the event that included Seeger are now to be determined, but the event will take place with a new title “How Can I Keep from Singing!” More information on the event schedule will be released as details become available.

The Woody Guthrie Prize will be given annually to the artist who best exemplifies the spirit and life’s work of Woody Guthrie by speaking for the less fortunate through music, film, literature, dance or other art forms and serving as a positive force for social change in America.

“Pete was so happy to be included in this fundraiser for the newly created Woody Guthrie Center in Tulsa, Okla,” Nora Guthrie said. “As the first recipient of the Prize, there can be no better person to set the standard than Pete. He was always available for a worthy cause. As his wife of 70 years Toshi joked, ‘I would have left him years ago, if only it was for another woman. Unfortunately, he was always away for another ’cause!’ It’s up to us now, to step in and make sure all the ‘causes’ that Pete believed in get our support.”

Tickets for the event are $40 or $50 and can be purchased by calling (212) 864-5400 or visiting www.symphonyspace.org. For additional information on the Woody Guthrie Center, click here.

An award that honors those who embody the spirit of legendary folk singer/songwriter Woody Guthrie will be presented to American musician and actor Kris Kristofferson during an event on Tuesday, Oct. 18 at 6:30 p.m. at Cain’s Ballroom in Tulsa’s Brady Arts District. More →