An award that honors those who embody the spirit of legendary folk singer/songwriter Woody Guthrie will be presented to American musician and actor Kris Kristofferson during an event on Tuesday, Oct. 18 at 6:30 p.m. at Cain’s Ballroom in Tulsa’s Brady Arts District.

With previous award ceremonies taking place in New York and Los Angeles, this year’s ceremony will be the first held in Tulsa.

The Woody Guthrie Prize is given annually to the artist who best exemplifies the spirit and life work of Woody Guthrie by speaking for the less fortunate through music, film, literature, dance or other art forms and serving as a positive force for social change in America.

“With over 50 years of social activism, Kris was an easy choice to receive the 2016 Woody Guthrie Prize,” said Woody Guthrie Center Executive Director Deana McCloud. “It is an honor to recognize his incredible career and tireless work to make positive improvements in our society.”

The event will include the Woody Guthrie Prize presentation and a special musical performance as friends, including Rodney Crowell and others, will join Kristofferson on stage to perform some of his most popular songs.

Kristofferson’s distinguished musical career has encompassed the writing of many American songs. Among some of his biggest hits are, “Me and Bobby McGee,” “Sunday Morning Coming Down” and “Help Me Make it Through the Night.” In addition to singing and songwriting, Kristofferson has a notable acting career in feature films including “Pat Garrett and Billy the Kid,” “A Star is Born” (for which he won a Golden Globe) and the “Blade” trilogy. Additional honors include three GRAMMY Awards and inductions into the Country Music Hall of Fame, the National Songwriters Hall of Fame and the Nashville Songwriters Hall of Fame.

Woody Guthrie’s songs celebrate the beauty and bounty of America and seek the truth about our country and its people. He turned complex ideas about democracy, human rights, and economic equality into simple songs that all Americans could embrace. Woody spoke for those who carried a heavy burden or had come upon hard times. His words gave a voice to their struggle, and his songs gave them hope and strength.

Tickets will be available beginning June 13th and can be purchased for $50 or $60. To purchase tickets, visit www.cainsballroom.com. For additional information on the Woody Guthrie Center, click here. 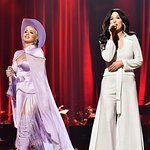 Dolly Parton was honored as the MusiCares Person Of The Year at a star-studded event at the Los Angeles Convention Center this week. More →