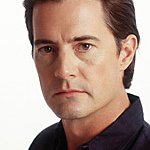 The 49-year-old former Twin Peaks actor is to front a new public service announcement on behalf of the Callaway Golf Foundation Women's Cancer Initiative urging women to seek early detection for ovarian cancer. His mother died of ovarian cancer in 1986, and MacLachlin wants to honor her memory by taking part in the campaign.

Earlier this year, Halle Berry was announced as the 2008 Ambassador for the initiative’s public service campaign, and has been appearing in magazine and newspaper advertisements for the program.

For more information about the initiative, visit www.callawaygolf.com.