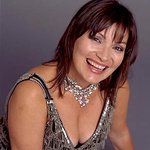 The three minute appeal will be aired this Sunday 30 March at 7.55am and 9.26pm, and repeated again on Thursday 3 April at 3.27pm. It will also be available on the BBC Radio 4 appeal website for a week after the first broadcast.

Lorraine became an ambassador for Sightsavers after joining the charity in Kenya in 2011 to witness the organisations’ work on eliminating a blinding disease called trachoma.

Trachoma starts off as a highly contagious bacterial infection, which left untreated makes the sufferers’ eyelashes turn inward so with every blink they’re scraping against the eye causing unbearable pain and eventually causes blindness.

Lorraine says: “I’ve seen for myself how Sightsavers can prevent blindness when I visited Kenya. Trachoma is a terrible disease. You know how horrible it is to get an eyelash in your eye, but imagine that feeling a hundred times worse day after day. That’s what trachoma is like. But it can be treated with a straightforward operation that costs just £8. The look of joy on a patient’s face when they are free of pain and they can see clearly again is remarkable. Just £8 can change someone’s life.”

Sightsavers is fighting to eliminate blinding trachoma by 2020 through a programme of surgeries, antibiotics, facial cleanliness and sanitation.