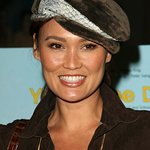 Actress and Grammy award-winning musical artist, Tia Carrere, has signed on to lend her melodious voice to the narrative of Gwapa, a powerful tale of strength, love and real-life heroes that follows a remarkable Filipino family and their inspiring journey to help their three kids with facial deformities.

The voiceover was recorded in Burbank, CA at Igloo Music Studios, in collaboration with Sine Motif Productions.

Born to Filipino parents, the American actress, model, voice artist, and singer obtained her first big break as a regular on the daytime soap opera General Hospital. Tia played Cassandra Wong in the feature films Wayne’s World and Wayne’s World 2, Nani in Lilo & Stitch and Lilo & Stitch: The Series, Queen Tyr’ahnee in Duck Dodgers, and Sydney Fox in the syndicated television series Relic Hunter. Tia also appeared as a contestant in the second season of Dancing with the Stars and the fifth season of The Celebrity Apprentice.

“I’m happy to support such an important cause,” said Tia Carrere. “The more people that know about the severity of cleft issues in the Filipino Islands, the more families we can help.”

Gwapa, meaning beautiful in Visayan, is a fitting title for this vibrant, real-life story that follows two Filipino families and their struggle to provide a healthy future for their kids. Every year, 4,000 – 5,000 Filipino children are born with cleft lip, cleft palate, or both. Cleft lip and palate are two of the most common and curable of birth defects. Sadly, many clefts go unrepaired in developing countries and can lead to serious disease. Just one surgery can change a child’s life forever. Gwapa (Beautiful) is the first feature length documentary dedicated to bringing awareness to the high number of children born with cleft deformities in the Philippines and the great need for free reconstructive surgeries among the Filipino islands.

“Tia is truly an awesome person. Her amazing voice will help the film reach more audiences and have a much larger impact on the issue,” said Meg Pinsonneault, the film’s director. “I’ve been a big fan of Tia since I was a kid, so this is a dream come true. We’re so thrilled to have Tia join the fight to cure cleft deformities!”

The documentary is the winner of IndieWire’s “Project of the Month” contest for December 2011, winning a consultation with the Sundance Institute and Snag Films. It is also the focus of many articles on prestigious websites like Take Part, Conscious Magazine, Film Courage, Kidult, and Mubi Garage, just to name a few. Gwapa (Beautiful)’s budget was crowd-funded on Indiegogo, where it was featured as a Staff Pick. The film is currently in post-production and is expected to hit the festival circuit Fall 2014.

Find out more about the film here.