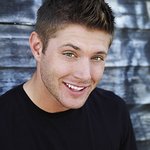 This year, millions of “Supernatural” fans were given the opportunity to design and vote for the artwork that will be featured on the Official Merchandise for The CW’s hit show.

The five winning Collector’s Edition T-shirts will be on sale this week; one new design will be released each day and on sale for 48 hours ONLY or until supplies last. By purchasing a T-shirt, fans are also automatically entered to win one of the 25 shirts signed by co-stars Jensen Ackles and Jared Padalecki.

Over the past three weeks, thousands of T-shirt designs were submitted and almost 100,000 votes were cast to determine which 20 designs would be delivered to the cast and crew. This week, May 12-16, Executive Producers Jeremy Carver and Bob Singer will announce one T-shirt per day (5 total) that the cast and crew have chosen as Official Merchandise!

Once the Official Merchandise sells out, they’re gone forever. 15% of proceeds will benefit the Juvenile Diabetes Research Foundation, and shirts will be on sale for $24 (domestic shipping is free).

To order the tees or find out more, click here.