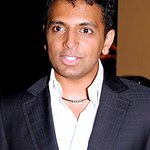 The screenwriter, director and producer of 10 films, including the Oscar-nominated smash hit The Sixth Sense, Shyamalan has grossed over $2 billion around the world. A master of supernatural thrillers, he is currently at work on Wayward Pines, a star-studded mystery series that debuts on Fox this fall, and a feature film, Labor of Love, starring Bruce Willis.

Born in India and raised in suburban Philadelphia – where most of his films have been filmed and set – Shyamalan recently published his first non-fiction book, I Got Schooled, about the foundation he co-founded with his wife, Bhavna, to help inner-city students succeed. The foundation supports remarkable leaders and their organizations that are working to remove the barriers created by poverty and inequality that prevent individuals and communities from unleashing their full potential. The foundation has begun to focus its domestic efforts on educational reform throughout the United States.

The Press Club luncheon will begin promptly at 12:30 p.m. Remarks will begin at 1:00 p.m., followed by a question-and-answer session, ending at 2 p.m. Tickets can be purchased by clicking here. The cost of luncheon admission is $22 for National Press Club members and $36 for the general public. Students with a valid ID may purchase tickets for $21. Tickets must be purchased at time of reservation.

National Press Club Luncheons are webcast live on press.org. Follow the conversation on Twitter using the hashtag #NPCLunch, or on Facebook and Twitter. Or email a question in advance, type SHYAMALAN in the subject line and send to president@press.org before 10 a.m. on the day of event.

The Press Club is on the 13th floor, 529 14th Street, NW, Washington, D.C. Credentialed press may cover this event.

Today ADCOLOR, the premier organization dedicated to celebrating and promoting professionals of color and diversity in the creative industries, announced the lineup for the 2019 ADCOLOR Conference, including an intimate conversation with filmmaker and philanthropist, M. Night Shyamalan. More →