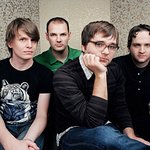 Death Cab for Cutie is offering to play a free gig at the college that registers the most youth voters for the upcoming US elections.

Any college is eligible, and students are also eligible for scholarships by signing up their friends. The initiative is being supported by the Ultimate College Bowl – a voter registration drive that unites the nation’s largest voter registration organizations and aims to get every US college student to register and vote in the 2008 election – and is also being supported by Declare Yourself, WhyTuesday?, and Headcount.

In addition to winning the concert, there are also six $10,000 scholarships up for grabs to the students who are directly responsible for registering the most of their friends, as well as 15 Guitar Hero 2 video game set-ups (hardware and software) to the top 15 students.

Death Cab for Cutie – who talked to Look To The Stars earlier this month – attended the 2008 Democratic National Convention in Denver, Colorado, in August, where they performed at a few shows in support of Barack Obama.

The winning school will be named in November, and the concert will take place some time in the 2008-2009 academic year. More information can be found at www.ultimatecollegebowl.com.