Tommy Lee Makes a Splash for Orcas in Twitter Blitz 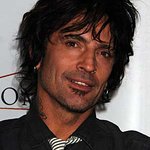 As Mötley Crüe’s farewell tour gets underway, Tommy Lee isn’t just causing fans to leap from their seats ― he’s causing them to look under them.

In an innovative way to engage his fans in an issue close to his heart, Tommy hosted a scavenger hunt at the band’s show near SeaWorld San Diego. Following clues that Tommy tweeted, fans tried to find a “SeaWorld Kills” T-shirt hidden by his friends at PETA. The fan who found the shirt won backstage passes to meet Tommy and celebrated his win by tweeting a picture of the shirt.

“In addition to the buzz generated at the show, Tommy’s half-million Twitter followers all learned about the cruel treatment and confinement of orcas at SeaWorld, which is a huge boost to our campaign,” says PETA Senior Vice President Dan Mathews.

Here are a couple of examples of Tommy’s strongly worded tweets. A PETA blog post about the unique blitz can be read here.

Tommy and PETA will conduct similar scavenger hunts at Mötley Crüe shows near SeaWorld parks in Texas and Florida. SeaWorld has been rapidly losing favor with the public ever since the documentary Blackfish exposed its inhumane treatment of marine mammals, and its sinking popularity reached new depths last week when Southwest Airlines ended its more than 25-year partnership with the park.