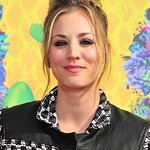 Big Bang Theory Actress Kaley Cuoco-Sweeting has talked with The Humane Society's All Animals Magazine about her animal advocacy work.

You’ve said you want to accompany The HSUS to the Canadian ice floes, where the Protect Seals team documents the hunt each year. What compelled that desire?
I think as a — I hate even using this — as a “celebrity,” people think we say a few things, and then that’s it, and we put it to bed. I need to show my fans, and people that agree with me and disagree with me, that I’m willing to go out there. I want to see it face to face. I’m not just saying that I believe in this campaign, and I want the hunt to end, and blah, blah, blah. I want to go there, so I can show them, “No, I was there. These are my own pictures. This is what happened, this is what I saw and this is what I believe in.”

How did you get started in animal advocacy work?
I’ve always loved animals. As a kid we had dogs. But my passion got very strong maybe eight years ago when I rescued my first dog [a pit bull named Norman].

I went to a rescue. And he walked in, and he jumped up on me and almost pushed me over. It was love at first sight. I don’t know what happened that day, but I became this pit bull lover. Now we actually have three, and I love them more than life itself. I think they’re absolutely amazing, and I want to promote rescue as much as possible. I walk into these shelters, and there’s thousands and thousands—and most of them are pit bulls that need rescue. It’s just become a big passion of mine, and it will be for the rest of my life.

Do animal issues ever get discussed on set?
Everyone that I work with knows how I feel about animals. Even this day that I was obsessed with the seal hunt, I was literally in the corner at work, and they’re like, “What’s going on?” I’m like, “seal hunt.” I was obsessed. And we’ve got a ton of animal lovers at work, but I think the biggest conversations and wars I have seem to be on Twitter, so bring it at me.

Kaley's mission to save seals