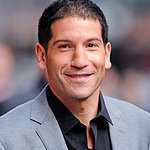 Jon Bernthal, star of the film Fury and the hit Walking Dead, is speaking out against dog heart experiments being performed at Wayne State University in Detroit, Michigan.

On November 1, 2014, timing it with the one-year anniversary of the death of a dog named Joanie, Jon Bernthal will send a letter directly to the President of the University asking him to stop these painful experiments in order to keep more dogs from being experimented on.

“As a pit bull rescuer and owner of two (Boss and Venice), I am deeply saddened to learn that Wayne State University is performing cruel, unnecessary heart failure experiment on dogs – experiments which have produced no benefits to human health throughout their two decade history”, says Jon in his letter to the president. He also accompanies the letter with a personal photo of his two pit bulls explaining that “dogs serve us all better as companions and as family members rather than experiments”.

The Physicians Committee for Responsible Medicine — a nonprofit of 12,000 concerned physicians — has also denounced the experiments as regressive and unscientific.