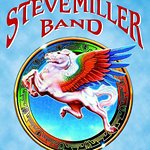 Call him the Gangster of Love. Call him Maurice. Call him the Space Cowboy. Call for your Charity Preview tickets now because on Jan. 16, rock legend Steve Miller Band will perform at the largest single night fundraiser in the world: the North American International Auto Show’s Charity Preview.

“Everybody knows that Steve Miller speaks ‘the pompitus of love,’” said Scott LaRiche, chairman, NAIAS 2015. “Steve Miller Band is legendary and we are absolutely ecstatic that he’ll be our very special musical guest at Charity Preview, helping us celebrate an amazing night and a spectacular week in Detroit.”

Admittance to “An Evening with Steve Miller Band” will be permitted with the purchase of a Charity Preview ticket. The special performance begins at 9 pm.

“When the show floor closes, the legend begins,” said LaRiche.

Charity Preview will be held from 6-9 pm. Tickets are $400 each ($390 of which is tax deductible) and available now at charitypreview.com.