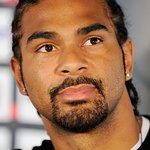 They’re two of the most accomplished stars in their respective fields, and now BAFTA Award winner Thandie Newton and former World Heavyweight Champion David Haye have another accolade to their names.

PETA UK – whose motto reads, in part, that “animals are not ours to eat” – has named the pair its Sexiest Vegan Celebrities of 2014.

Haye went vegan at the beginning of this year and was immediately open about his reasons for doing so. “I watched a TV documentary about how animals are farmed, killed and prepared for us to eat”, he explained. “I saw all those cows and pigs and realised I couldn’t be a part of it any more. It was horrible. I did some research to make sure I could still obtain enough protein to fight and, once satisfied that I could, I stopped. I’ll never go back.”

Newton agrees. She’s stated, “I don’t want any kind of suffering of any living form… Animals are being pumped full of growth hormones which are then getting fed to our kids. And it’s affecting the water, environment.” And drawing a parallel between all animals, the mother of three tweeted, “While expressing my milk realised that the equivalent for cows is my milk going to the mouths of people who murder and eat my family #VEGAN.”

The award is given to recognise celebrities for their efforts in promoting compassion for animals – while demonstrating how healthy plant-based eating can be. Previous winners of PETA UK’s Sexiest Vegetarian title include John Bishop, Lily Cole, Leona Lewis, Anthony Kiedis, Eliza Doolittle, Jay McGuiness and Russell Brand.

Newton and Haye will each receive a framed certificate and a box of vegan chocolates.