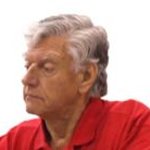 Darth Vader isn’t all that evil – he’s helping a British man lose weight so he can skywalk for charity.

David Prowse – who played Darth Vader in George Lucas' Star Wars films – is known for his work training actors, such as Christopher Reeve, to get fit. But in his latest role, the 73-year-old is doing what he loves best: helping raise money for a charity that helps people with disabilities.

British man Nick Lawson is planning to do a tandem skydive to raise money for Phab Kids – a charity of which Prowse is the vice president – and the former actor is helping him train for the event.

“It is a great opportunity to work with Phab, and to meet such an inspirational role model as Dave,” Lawson told the Croydon Guardian in Britain. “Phab is a great charity which for more than 50 years has been bringing together people with and without disabilities, to learn from each other, and above all to have fun. It is a small charity with a big heart and every penny and every pound really does make a difference.”

Helping people with disabilities is a cause close to Prowse’s heart: he has suffered from arthritis for much of his life, and has had both hips replaced.

The Jackie Robinson Foundation (JRF) announced today the recipients of the 2020 ROBIE Awards to be presented at its annual Awards Dinner on Monday, March 2nd, at the New York Marriott Marquis. More →