Jonathan Groff to be Honored by Point Foundation 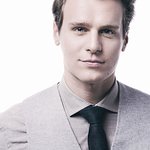 The Award recognizes a young trailblazer who has taken a leadership role as an advocate of the lesbian, gay, bisexual, transgender and queer (LGBTQ) community. Groff, currently starring in HBO’s critically acclaimed series “Looking” and appearing in the Public Theater’s hit musical “Hamilton,” was nominated for a Tony Award for his performance in “Spring Awakening.”

Groff will receive the Point Horizon Award at the Point Honors gala at the New York Public Library on Fifth Avenue. The gala program also features the presentation of the Point Courage Award to actor Jeffrey Tambor. The evening is a benefit for Point Foundation, the nation’s largest scholarship-granting organization for LGBTQ students of merit.

“As a proud member of the ever-evolving LGBTQ community, I am so moved by how the Point Foundation truly brings us together as a community in order to reach back and help the youngest generation find pride and inspiration in being who they are,” said Jonathan Groff. “The Foundation helps these young LGBTQ scholars, at perhaps their most vulnerable age, realize that the thing that makes them different can be one of their greatest assets.”

“Jonathan Groff is a young star of great talent, ambition and vision – very much like our Point Scholars,” said Jorge Valencia, Executive Director and Chief Executive Officer of Point Foundation. “He is a proud member of the LGBTQ community and uses his position to speak about both the challenges and opportunities young LGBTQ people face in society. As an actor and an advocate, Groff is an inspiration to the next generation of LGBTQ leaders.”

The Co-Chairs for Point Honors are Brunson Green, Herb Hamsher, and Judith Light. Additional celebrity participation for the April 13 Point Honors event will be announced in the coming weeks. Some of Point’s 80 current scholars and 187 alumni will be present at the event to share with the audience their inspiring stories about how they have overcome challenges to get their higher education degrees. Information about attending or supporting Point Honors can be found at www.pointfoundation.org/HonorsNY15.

About Point Foundation: Point Foundation empowers promising LGBTQ students to achieve their full academic and leadership potential – despite the obstacles often put before them – to make a significant impact on society. Since 2001, Point has invested $18 million in the education and support of Point Scholars. Point Foundation promotes change through scholarship funding, mentorship, leadership development, and community service training. Learn more about Point Foundation at www.pointfoundation.org.