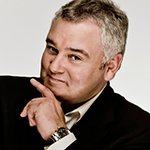 Variety - The Children's Charity, today announced that one of Britain’s favourite presenters, Eamonn Holmes, was formally inducted as the charity’s latest Celebrity Ambassador at the Chief Barker’s Annual Reception on 28th April 2015.

Officially inaugurated by Chief Barker Jason Lewis, the Annual Reception was also an opportunity for the Chief Barker to introduce himself to key supporters, and thank them for their continuous hard work.

A long-running supporter of the charity, Eamonn will formally join an illustrious list of stars that have supported Variety in the recent years including Dynamo, Warwick Davis, Denise van Outen, Sir Michael Caine and James McAvoy. In his first official event as a Celebrity Ambassador, Eamonn will host the launch of Variety’s limited edition anniversary book “SHOOTING STARS”, celebrating the greatest moments from the charity’s first 65 years, on Tuesday 19th May at the London Film Museum.

“Shooting Stars” features images taken by the late Doug Mackenzie, who kindly signed over his entire image and copyrights to Variety. Doug captured many celebrity supporters throughout the years, including members of the Royal Family, leading politicians and stars of screen, stage and television. The coffee table book highlights the illustrious 65 – year history of Variety in its important work with sick, disabled and disadvantaged children. Patron of the charity, HRH The Duke of Edinburgh has written the foreword for the book and other contributors include Sir Roger Moore, Sir Michael Caine CBE and Dame Esther Rantzen. A special feature of the book will be devoted to photographs of the former Chief Barkers, with brief biographies highlighting their achievements and their contributions to the Charity. In a united effort, images for the book were shortlisted by Joe Williams and the final selection chosen collectively by Crew Members.

Celebrity attendees for the glamorous event will include the legendary Welsh singer Dame Shirley Bassey as well as Barbara Windsor MBE, Cilla Black OBE, Angela Rippon OBE, Stephanie Beacham and Christopher Biggins, all of whom have had images selected for the book.

With deep roots in entertainment and film, Variety, the Children’s Charity, is dedicated to supporting children and young people across the UK who are disabled and disadvantaged, facilitating positive experiences for them through its vast array of showbiz orientated programmes and initiatives. Since setting up its UK division in 1949, the charity has raised over £260 million and supported more than 800,000 children.