Blood is an essential component for life, but many people do not think about it until the need is critical. Each year 234 million major operations are performed worldwide, many involving blood transfusions or treatments resulting in a continuous need for donations.

That’s why Abbott and Real Madrid soccer star Cristiano Ronaldo are partnering to bring even more attention to this important cause. Regarded as one of the top soccer players in the world, Ronaldo will serve as the first global ambassador for the BE THE 1 movement – developed to inspire young people around the world to regularly donate blood.

“We can all make a difference by donating blood. Each donation can benefit up to three people in emergency situations and for long-term medical treatments,” said Cristiano Ronaldo, forward for Real Madrid and Captain for Portugal National Football. “That’s why I am enthusiastic to be partnering with Abbott to bring awareness to the importance of blood donation and to encourage people around the world to become lifelong blood donors and help save lives.”

As a regular donor, Ronaldo understands the importance of blood donation. He first gave blood after seeing his teammate’s son was sick and was in need of a donation. Since then, he has continued to donate regularly and avoids any activities that would even temporarily prevent him from donating.

While 108 million donations are collected each year, only a fraction of the world’s 7 billion eligible people are donating. For those who need a transfusion, the need is even greater given that blood has a short shelf life and can expire. An adequate, reliable supply of blood can only be assured through a stable base of regular, voluntary, unpaid blood donors.

As a global leader in infectious diseases and diagnostics, Abbott’s testing instruments screen more than 50 percent of the world’s blood supply. As a result of careful donor selection and testing, millions are safely given blood transfusions every year. Through its Global Surveillance Program, Abbott works to keep the blood supply safe by continually identifying new viruses and diseases, as well as newly-emerging strains of HIV, Hepatitis B and Hepatitis C, in order to incorporate detection of such viruses into the blood screening process. 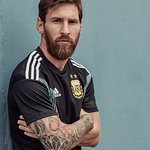 Cristiano Ronaldo and Leo Messi Team Up in Amazing Auction for the Forever Dream Foundation with CharityStars Jul 12, 2018

Cristiano Ronaldo signing a four-year deal with Juventus has nothing on his continued plight with Lionel (Leo) Messi to give back to those in need. More →