Celebrity Teams Announced For Sports Relief: Clash Of The Titans 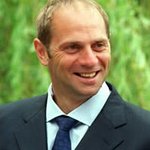 Team captains Sir Steve Redgrave and Freddie Flintoff have revealed the first members of their teams for Sport Relief: Clash of the Titans.

More names will be announced soon.

To attend the event and be part of the 8000 strong crowd, tickets are now on sale here.

Highlights will include Take Me Out host Paddy McGuinness grappling with McFly's Harry Judd in the Wrestling event in front of 6,000 cheering fans in the Velodrome at Lee Valley VeloPark.

In a battle of the broadcasters, The One O’ Clock News’ Sophie Raworth will go head to head against Radio 1’s Clara Amfo in the cycling leg of the team triathlon.

Nose pegs at the ready as Will Young and Russell Kane take on Synchronised Swimming in what are certain to be two memorable routines. Whilst Maddy Hill, Darren Gough and team Captain Freddie Flintoff will take to the gymnastics mat in the Rhythmic Gymnastics Event.

To buy tickets for Clash of the Titans go to SeeTickets.com. Tickets are £16 plus booking fees, £2.50 from the sale of each ticket will go directly to Sport Relief. The BBC will not profit from the sale of these tickets.

The Sport Relief Weekend takes place from Friday 18th to Sunday 20th March and sees the return of the Sport Relief Games. This year, the public can walk, run, swim or cycle their way to raising life- changing cash.

Money raised this Sport Relief will make a massive difference to people living incredibly tough lives, here at home in the UK and across the world’s poorest communities.