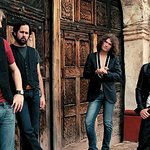 The Killers played an unannounced acoustic set at the first of Mencap's Little Noise Sessions in London on Saturday night.

The British rockers made their surprise appearance at a show that also featured Glasvegas, White Lies and Cage The Elephant. They played 3 songs, including Human, Smile Like You Mean It, and an inspired performance of Cyndi Lauper’s Girls Just Want to Have Fun.

Surprise acoustic performances are a traditional part of Mencap’s Little Noise Sessions. Last year, Bono and The Edge from U2 took to the stage unannounced and played four acoustic songs.

The sessions take place over eleven nights at Islington’s Union Chapel to raise money for the charity, which works with people who suffer from learning disabilities. Kasabian, Stereophonics, Keane, and Razorlight are all scheduled to perform over the next week and a half, and tickets are available from the Mencap Music website.