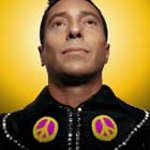 Music history was made last month as pop star and philanthropist Sir Ivan went Top 10 with an all new uptempo version of John Lennon's “Imagine”, on three significant industry charts, 45 years after the original release in 1971.

New Zealand based SERATO’S promotion division, Serato White Label, ranks “Imagine” by SIR lVAN # 1 for the greatest amount of DJ downloads during the month of July. SERATO is the leading DJ equipment and software manufacturer in the world. Although SIR IVAN sits on the top of the chart, he was also joined by Gwen Stefani, M.I.A. and Imany.

SIR IVAN’s new electronic dance music (EDM) version of Imagine spent weeks on the Billboard Dance Club Chart. The song was co-produced by Grammy Award winner Omar Akram and legendary music arranger Peter Rafelson. It has been praised globally and fans of both the original and the new are dancing and working out to the most iconic peace song ever written. “Imagine” is the first single released off SIR IVAN’s new 10 song album called Peaceman Shines. Each of the 10 songs, created by 10 different producers, are well known anti-war or peace songs from the 60s and early 70s, except for two original songs, co-written by SIR IVAN, that share the same theme.

This is not the first time SIR IVAN has released an uptempo version of “Imagine.” He did so on September 4th, 2001, exactly one week before September 11th, when he launched his music career and became the first recording artist in history to turn any slow ballad of the Beatles or John Lennon into an uptempo dance record. Personally signed to the Tommy Boy label by its owner, Tom Silverman, SIR IVAN’s revolutionary fast paced version of “Imagine” became an instant Top 40 hit on the Billboard Dance Club Chart. This proved that even thirty years after the original was released by John Lennon in 1971, the lyrics of “Imagine” were just as relevant to a whole new generation. Now, 15 years after SIR IVAN first turned the ballad into a dance record, and because terrorist attacks are occurring all over the world, he is once again giving the planet an opportunity to heal itself through the therapeutic power of music. He urges us to come together as one, while raising money for a worthy cause.

In 2005, SIR IVAN, son of Auschwitz survivor Siggi B. Wilzig, created The Peaceman Foundation, a charity that donates funds to other non-profit organizations that help people suffering from Post-Traumatic Stress Disorder (PTSD). PTSD is a debilitating mental condition that often results from exposure to severe acts of violence, such as physical attacks against members of the LGBT community, atrocities of war and terrorism. SIR IVAN has seen firsthand what survivors go through. His own father suffered from classic PTSD symptoms; fierce headaches, flashbacks, nightmares and depression, as a result of brutal beatings in the concentration camps and the murder of 59 members of his family during the Holocaust. All of SIR IVAN’s recording artist royalties from the single “Imagine” and the album “Peaceman Shines” will be donated to The Peaceman Foundation to battle PTSD and provide treatment for the psychological wounds caused by hatred and violence. Both are available on iTunes, Amazon MP3, and many other top digital music stores. Physical CDs can be purchased at CD baby.