Interview: Diane Pernet Talks To Look To The Stars 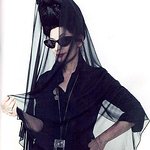 Seoul Fashion Week S/S 09 took place at the end of October this year.

Among the fashion experts to attend was Diane Pernet. A photographer and filmmaker, in the 80s and 90s Pernet was also a fashion designer for her own fashion line in New York City. That line received attention from magazines like Vogue and was worn by supermodels such as Janice Dickerson. In the mid-1990s she moved to Paris and has lived there ever since.

Pernet has been a fashion journalist and critic for heavy weights such as Elle.com and VogueParis.com. She is an associate editor for Zoo Magazine and is also a consultant and editor for the biggest online fashion network, Igons.com. She is also works as a curator and fashion and photo scout for the d’Hyeres festival. Most important, she is probably best known for having one of the most influential websites on fashion, A Shaded View on Fashion (ASVOF). In addition to ASVOF she has a film project which brings together her two loves: fashion and film.

One distinctive thing about Diane is her look. She is someone who knows the fashion industry from many angles, but interestingly her look is static. She’s known for wearing her dark hair in a towering pompadour with a black veil, black cat eye shades, and layers of black clothing. This constant look stands in stark contrast to her pale white skin and dramatic rogue lips.

I had a chance to sit down with her and ask her a few questions about her charity and fundraising work.

She started off by telling me that she’d just participated in an online auction with Lee Cooper (a British Denim company). The company asked Pernet to draw upon her talent and experience as a fashion designer, and they requested that she design an outfit that would be auctioned off on eBay.

She added that Lee Cooper is also is involved with Designers Against AIDS (DAA), a non-profit that lists her in their Hall of Fame. DAA’s mission is “to raise AIDS Awareness in the international media and towards the general public, more specifically towards young people in the industrialized countries.” They do this by “asking famous and emerging fashion designers, musicians, artists and other celebrities to create designs that we then print on items such as T-shirts, sweaters, bags, hoodies, condom boxes, ringbinders, etc.”

Diane also told me about the Le Bal d’Amour. She said it’s similar to The Love Ball that is held in New York City. When she first moved to Paris in the mid-90s she worked full time without pay for six months to help put together an event for Le Bal d’Amour, which was “a huge thing.” She said that the goal was to raise money for people who were actually suffering from AIDS and to distribute those funds directly to AIDS organizations that would get help “to the people who really needed it.”

She ended our discussion on her charity and non-profit work with this quote, “I have to say nothing feels better than helping other people. I do it in my own way with fashion, but also with causes…”

December 1 was World AIDS Day, and Black Eyed Peas singer apl.de.ap sent this message to the planet via Designers Against AIDS. More →