On 5 March 2017 the Naked Heart Foundation, set up by Guerlain makeup and Shalimar fragrance muse Natalia Vodianova, once again joined forced with Guerlain to take part in the 21km Paris run.

This year’s fundraising goal is to empower the charity’s “Summer with Purpose” project and organise much needed integrative summer camps for children and young adults with autistic spectrum disorders (ASD) across Russia.

In 2016, thanks to the support of Guerlain and the charity’s volunteers, who fundraised for the same cause, the Naked Heart Foundation was able to conduct a unique training programme for provincial Russian NGO specialists and support the organisation of their summer camps for children with ASD. As a result, 162 families were able to send their children to a summer or autumn camp, and 119 specialists learned to use modern, evidence-based methods of work.

Every March for eight years running, la Maison Guerlain and the Naked Heart Foundation, have been joining forces to put together a team of 70 runners to participate in the Paris Half Marathon. The team includes Guerlain and Naked Heart Foundation staff and a number of volunteers, who selflessly raise money for the charity’s work with children with special needs. Lucas Portman, Natalia Vodianova’s eldest son, also took part in the event along with the Naked Heart and Guerlain representatives.

After the race the Naked Heart Foundation and Guerlain team celebrated their results at an intimate party at Le Paradisio club, where they were treated to a unique “Runner star” cocktail, especially created by Beluga’s mixologists.

Since 2011, the Naked Heart Foundation has been supporting projects to set up integrative summer camps, which play an important role in the physical, mental and intellectual development of children and young people with special needs. In 2015, the charity changed the format of the “Summer with Purpose” project by adding a unique training programme, developed by the Foundation in collaboration with leading experts from the University of New Mexico and aimed specifically at NGO professionals who had been selected to create developmental recreation opportunities. The results of the project, now up and running in the new format, were evaluated highly by the experts at the University of New Mexico who supervised the training of the specialists, and by members of the regional NGOs who took part in the project, green lighting its continuation into 2017.

There’s still time to make a donation to Natalia or any of the other runners on the team’s official fundraising page. 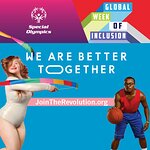 Special Olympics Continues The Revolution is Inclusion Campaign and Kicks Off Global Week of Inclusion Jul 16, 2019

During the month of July, Special Olympics is continuing “The Revolution is Inclusion” five-year global campaign targeting the younger generation of Millennials and Centennials by demonstrating that inclusion is all about togetherness. More →