Natalia Vodianova is a Russian model, philanthropist and mother of four who now permanently resides in France. She has achieved considerable success as a runway, editorial and advertising campaign model and according to Forbes is in the top 5 most earning top-models in the world.

In addition to supporting the NSPCC, Women for Women International and (RED), she is the founder of the Naked Heart Foundation, a charity organisation that strives to provide support for families raising children with special needs and to create an inclusive and inspiring environment in which to play for every child living in urban Russia, and internationally. The organisation built its first play park in 2006 in Nizhny Novgorod and has since built 136 all over the world including 3 in the United Kingdom; in London, Liverpool and Glasgow. In the last 10 years, Natalia and the Naked Heart Foundation have raised €30 million for charity.

Born in Gorky, Soviet Union (now Nizhny Novgorod, Russia) as a teenager, Vodianova helped her single mother sell fruit on the street and later set up her own fruit stand with a friend to help her family out of poverty. Natalia grew up with two half-sisters, one of whom has cerebral palsy and a pronounced autism. She experienced first-hand the lack of a social support system in Russia, and the hardship and struggle for survival that families raising children with special needs experience at home.

At the age of 15, Vodianova enrolled in a modelling academy. By the age of 17, Vodianova had moved to Paris, and signed with Viva Models. To date, Vodianova has walked in more than 175 runway shows for U.S. and European based designers and has been face of countless world renowned brands including Guerlain, Calvin Klein, Givenchy, Louis Vuitton, Yves Saint Laurent, L’Oréal, David Yurman, Marc Jacobs, Stella McCartney, Versace, Diane von Fürstenberg, Chanel, Etam and more.

On 28th February 2012, Natalia turned 30 and decided to establish her own voice in social media, establishing an online profile on Facebook and Instagram as @NataSupernova.

According to Facebook Russia, she is now one of the most followed celebrities in Russia, her overall social media audience exceeds 1million. Natalia sees social media as an instrument of triggering social and corporate responsibility to make the world a better place.

For her contribution and philanthropy Natalia has been honoured by a number of international awards including Harper’s Bazaar Women of the Year 2013, Inspiration Award by DVF Awards 2013 and Glamour Woman of the Year 2014 as Voice for the Children.

Natalia has been a torch bearer for the Paralympics in London 2012, and an ambassador for Sochi Winter Paralympics and Olympics 2014.

She founded the Naked Heart Foundation to help to provide safe play environments for children in urban Russia.

Natalia was a spokesperson for the Tiger Trade Campaign, and made a video urging people to stop the sale of tiger parts and products for WildAid.

Vodianova has offered her support to Hear The World, acting as an ambassador.

Natalia Vodianova has supported the following charities listed on this site:

Google trends for "Natalia Vodianova"
Available to Insiders only
Get Insider Access to these insights & more...

You can contact Natalia Vodianova using details from this service. (Or read our advice on how to contact celebrities) 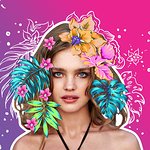 PicsArt, the leading image editing app and creative social network, today announced the appointment of Natalia Vodianova, the supermodel and philanthropist, as Head of Aspiration. More →

On 5 March 2017 the Naked Heart Foundation, set up by Guerlain makeup and Shalimar fragrance muse Natalia Vodianova, once again joined forced with Guerlain to take part in the 21km Paris run. More → 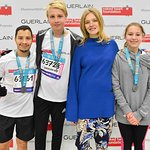 On 6 March 2016, the Naked Heart Foundation – set up by Natalia Vodianova, Guerlain makeup and Shalimar fragrance muse – joined forces with Guerlain to take part in the Paris Half Marathon. More →
More news about Natalia Vodianova →