In a world where, he says, 41 million children under the age of five are overweight or obese, one of his six points is for governments to provide mandatory targets to reduce excessive sugar in all products and to enforce penalties for non-compliance.

Oliver’s blog recently posted that Public Health England has just included sugar reduction in their newest guidelines. “They said if businesses remove 20 percent of the sugar in the most-consumed kid’s goods, 200 thousand tonnes of sugar could be cut down from kids’ diets,” the blog says. Oliver would still like to see the guidelines become mandatory, however.

There are other countries with good news that he highlights as well. Canada, for instance, could be set to lead the way with a levy on sugary beverages. An Ontario university study found that “a Canadian tax on sugary drinks has the potential to reduce the prevalence of obesity and to improve the health of Canadians, while providing substantial revenue to support other public health measures.” There is growing support across the country for this levy, as well as restrictions on marketing to kids, improved food labelling and the provision of affordable healthy alternatives.

France has another good news story. Over the past decade, France has put several restrictions in place on what food and drinks can be served in schools, and in January regulated that restaurants can no longer offer free refills of sugary drinks.

And, earlier this month, Reuters reported that “the city of San Francisco is about to become the first in the US to rid all its hospitals of the [sugary] drinks that researchers believe feed national epidemics of obesity and diabetes.”

“Obesity is a complex problem,” says Oliver, “but what’s really terrifying is that it’s a precursor to a whole host of diet-related diseases. For me, it’s junk food marketing, inadequate food education and unregulated sugar in everyday products that are putting the health of future generations at risk. And we can’t ignore the financial impact either – obesity globally costs us an estimated £1.5 trillion a year in health care and lost productivity.” 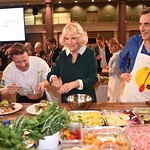 The Duchess of Cornwall Attends The UK CEO CookOff In Support Of UKHarvest Mar 23, 2017

The Duchess of Cornwall attended the UK CEO CookOff in London this week in support of the charity UKHarvest, of which Her Royal Highness is Patron. More →