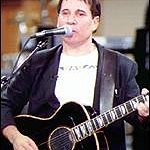 Grammy-winning singer-songwriter Paul Simon has reached the midpoint in his month-long tour to raise awareness of the importance of protecting the planet’s biodiversity.

Last month, Simon plugged the tour on The Late Show with Stephen Colbert. Simon is inspiring audiences across the U.S. with new and beloved songs, and donating tour proceeds to the Half-Earth Project, an initiative of the E.O. Wilson Biodiversity Foundation.

Simon first met E.O. Wilson at TED over a decade ago. In 2016, Simon reviewed Wilson’s book, Half-Earth: Our Planet’s Fight For Life, for The New York Times, saying, “Half-Earth is compulsory reading if we care about the lives of our children, our children’s children and all of the species alive today.”

Simon has talked about Half-Earth at each of his shows, often donning a Half-Earth cap. According to the CincyMusic website: “Throughout the show, a baseball cap with a small ‘e’ rested on his mic stand. Simon returned for Encore No. 2 with it atop his head for the first time. He explained, ‘This cap that I’m wearing…it represents an organization called Half-Earth that was started by a scientist, E.O. Wilson… his book, Half-Earth – which I recommend to anyone who is interested in ecology and the planet and saving what we’ve got – had a great effect on me.’”

Wilson said of the tour: “I am delighted that Paul Simon is helping raise awareness of Half-Earth. Paul believes strongly in our work to save the planet’s biodiversity.”

“Species are the basic units of biodiversity, yet we are driving them to extinction up to 1,000 times faster than before the coming of humanity,” said Wilson. “If we do not move quickly to reverse our negative effects on the rest of life, its diversity will be diminished drastically to our loss and even endangerment.”

The E.O. Wilson Biodiversity Foundation fosters stewardship of our world through biodiversity research and education initiatives that promote and inform worldwide preservation of our biological heritage. The Half-Earth Project has science at its core and our moral obligation to the rest of life at its heart. To learn more about Half-Earth, visit www.half-earthproject.org.