Fun Academy Motion Pictures, the studio behind the upcoming animated family film Sgt. Stubby: An American Hero and Variety – The Children’s Charity of Southern California, one of the entertainment industry’s most respected and generous non-profit institutions, are co-hosting the world premiere of the animated family feature as a fundraising event to benefit Variety – the Children’s Charity of Southern California and the Boys and Girls Club of Boyle Heights on Tuesday, March 27 at the Regal L.A. LIVE in downtown Los Angeles.

Tickets and event sponsorships are available to allow kids from underserved L.A. communities to attend the premiere. All net proceeds will be donated by Fun Academy to Variety – the Children’s Charity of Southern California, which has been serving the Los Angeles area since 1941.

Sgt. Stubby: An American Hero, in theaters everywhere April 13, is based on the incredible true story of the unbreakable bond between a young Soldier and a stray dog who, for his valorous feats, is still recognized today as the first dog promoted to the rank of Sergeant in the U.S. Army. Stubby is the most decorated dog in American history and is widely considered the forerunner to the U.S. Army’s working dog program. Set against the backdrop of America’s entry into World War I, this computer-animated feature shows the world that the greatest heroes can come from the unlikeliest of places in a heartwarming “tail” for the entire family.

On March 28th, the day following the world premiere, Fun Academy and Variety – the Children’s Charity, will co-host screenings in 14 cities across the U.S. and Canada – a first in the charity’s 90-year history – to further benefit Variety programs that provide life-saving, life-changing and life-enriching equipment and services to children who have a disability or are disadvantaged.

“We are delighted to partner with Variety – the Children’s Charity to host the world premiere screening and multi-city tour of Sgt. Stubby: An American Hero,” said Richard Lanni, director of Sgt. Stubby and founder of Fun Academy. “We are excited to host 500 children and their families from organizations supported by Variety SoCal, including the Variety Boys and Girls Club of Boyle Heights, at our world premiere to enjoy this dog’s eye view of American history that kids will love, parents and educators will appreciate, and all ages can enjoy together.”

“Variety – the Children’s Charity of Southern California is honored that Fun Academy Motion Pictures will premiere this heartwarming story to benefit children with special needs in our community. The children whom Variety supports overcome adversity every day. The inspiring story of Sgt. Stubby is one that the kids will really enjoy,” added John C. Hall, President of the Board of Directors of Variety of Southern California.

The March 28th screenings locations are spread across North America and benefit causes selected by each local chapter (or “tent”) of Variety – the Children’s Charity:

Opening on approximately 3,000 screens across the U.S. and Canada and coinciding with the year-long 100th commemoration of the United States’ role in the “War to End All Wars,” Sgt. Stubby was directed by award-winning documentarian Richard Lanni in his feature film debut and stars Logan Lerman (Fury, The Perks of Being a Wallflower, Percy Jackson & The Olympians), Helena Bonham Carter (the upcoming Ocean’s 8, the Harry Potter films, The King’s Speech, Sweeney Todd) and Gerard Depardieu (Life of Pi, Cyrano De Bergerac, The Man in the Iron Mask, Green Card).

As documented in history books but largely forgotten today, the true story of Sgt. Stubby will resonate with parents, educators, animal lovers, military supporters and history buffs alike. The film has been selected as an official project of the United States World War One Centennial Commission and its French counterpart, La Mission du Centenaire 1914-18; additional endorsements and educational partners include the Connecticut State Library, the National Infantry Museum Foundation, the National World War I Museum & Memorial, and the Lowell Milken Center for Unsung Heroes.

Beyond his military exploits, Stubby’s status as an adopted stray has resulted in nearly a century of recognition by animal rescues and welfare organizations and Fun Academy has partnered with more than 70 regional and national animal organizations across all 50 states to shine a light on the human-animal bond and the amazing things adopted animals can do when given a chance in life. 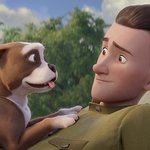 As pet lovers celebrate their furry friends throughout the month of April — National Pet Day, April 11; Kids and Pet Day, April 26; and National Adopt a Shelter Pet Day April 30 — critics from coast to coast have embraced the heartwarming, animated family tale Sgt. Stubby: An American Hero, based on the incredible, documented true story of a scrappy, little stray dog who became a celebrated hero on the battlefield during World War I. More →