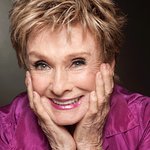 As families prepare their holiday menus, Oscar winner Cloris Leachman cuddles up to a rescued turkey named Frank in a brand-new ad for PETA that proclaims, “Give Thanks and Go Vegetarian.”

Now, she’s challenging everyone to join her: “Step out of your dark shadow. Be a little progressive. If you wouldn’t eat a dog, why would you want to eat a turkey?”

In an exclusive video interview with PETA, Leachman — who’s been acting for more than 70 years — credits her longevity to meat-free eating. “You can discover it for yourself, but I’m ninety-f***ing-two and I’m coming on ninety-f***ing-three, and I haven’t eaten meat for a long, long time,” she says. “There’s no reason to eat animals. When you’re eating one, you think, Ew, I’m eating [someone who] just lost his life to me.”

PETA — whose motto reads, in part, that "animals are not ours to eat " — notes that in addition to sparing many animals every year immense suffering on factory farms and the decks of fishing boats, going vegetarian lowers a person’s risk of suffering from heart disease, cancer, and obesity. It also drastically reduces one’s carbon footprint.

Leachman is a longtime PETA supporter whose previous campaigns include a “Let Vegetarianism Grow on You” ad in which she wore a cabbage gown.