Crown Royal continued their multi-year NFL partnership, which includes the “Kick off with Crown Royal” campaign by dedicating $25,000 from the Crown Royal Generosity Fund to the Southern Smoke Foundation, an organization created to take care of food and beverages workers who need it most.

The donation is a part of the award-winning whisky’s $1 million commitment to hospitality workers, active duty military members, and veterans throughout the NFL season.

As the first-ever whisky sponsor of the NFL, Crown Royal continued their pledge to honor those who help fans celebrate gameday by partnering with NFL Legends, Bo Jackson and DeMarcus Ware, in a cook off at the Southern Smoke Festival. The Legends collaborated with local Houston restaurateurs to create two unique Crown Royal infused BBQ sauces and went head-to-head in a BBQ sauce competition. Consumers 21+ voted for their favorite sauce, raising further funds for the Foundation. After Team Bo Jackson took an early lead, Team DeMarcus Ware came back to seal the victory for the best Crown Royal infused sauce.

“We’re proud to continue to give back to the hospitality community, and extend our partnership with the Southern Smoke Foundation, who shares in our mission of helping those who help us celebrate gameday,” said Nicky Heckles, Vice President of Crown Royal. “This season, we’re excited to further our relationship with Houston and the greater-Texas community by giving back directly to the hospitality industry with Bo Jackson and DeMarcus Ware.”

Building on Diageo’s league sponsorship deal which first launched during the 2021-22 NFL season, Crown Royal’s generosity efforts will continue throughout the NFL season with activations in partner stadiums and cities, benefiting hospitality industry employees. These efforts will extend to another group whose generosity continues to go unmatched, military veterans, who Crown Royal has supported for over a decade through The Purple Bag Project.

“We’re thrilled to continue our relationship with Crown Royal as we aim to inspire generosity towards the people who make gameday what it is—the bartenders, servers, dishwashers, and more who help us enjoy each and every NFL gameday,” said Kathryn Lott, Executive Director of Southern Smoke Foundation. “As we continue in our mission of helping our own, the food and beverage industry, we’re thankful to Crown Royal for their ongoing support of our efforts.”

In its first year as an official NFL sponsor, Crown Royal made a $1 million dollar commitment to more than twenty national and local nonprofits that support communities in need. Additionally, the brand extended The Crown Royal Water Break campaign by distributing over 6,000 water bottles on gameday to encourage responsible drinking and continued The Purple Bag Project by packing over 200,000 Purple Bags for the military community.

All season long, fans can head to crownroyal.com and @crownroyal on Instagram to hear the stories of the people who keep their communities thriving. Crown Royal invites you to raise a glass to all those who help make your gameday great, and please drink responsibly.

*The Crown Royal Generosity Fund is a donor advised fund with Diageo North America, Inc. as the donor and which is administered by Fairfield County’s Community Foundation, an IRS 501c3 organization. The dispersal of funds from the Crown Royal Generosity Fund is subject to the approval of Fairfield County’s Community Foundation. 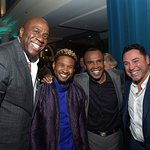