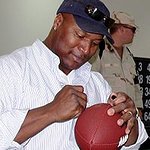 Bo Jackson, former pro football and baseball player considered one of the greatest athletes of all time, is jumping on a bike for a whole new challenge — 300 miles across the state of Alabama in five days.

The event is called “Bo Bikes Bama” and it’s a fundraiser for victims of the tornadoes that devastated Alabama in April of 2011.

Jackson’s hometown of Bessemer was spared by the storms, which killed more than 200 people statewide. But he says he feels a connection to the people who were affected.

“It could’ve easily been my town with my friends and my family,” he says. “This is about the victims that lost their lives and trying to get these people back on their feet and trying to put a little sunshine back in their lives. If I can put a smile on someone’s face for that day while I’m riding through their town, that makes me feel good.”

Jackson’s ride will start in Henagar on April 24 and end in Tuscaloosa on April 28. Along the way, other famous athletes like Ken Griffey, Jr., Lance Armstrong and Picabo Street will join him. The final 3.5 miles will be what’s called a “community ride.” For a $200 donation, anyone can hop on a bike and ride to the finish line with Jackson. HLN anchor Ryan Smith will participate in the race as well.

Jackson has set a fundraising goal of $1 million. The money will go directly to the Governor’s Emergency Relief Fund, which is helping tornado victims rebuild and piece their lives back together. If you’re not up for the ride, you can still donate $10 by texting BOBIKES to 50555.

Lance Armstrong joins Wish for Wheels Board of Directors Dec 4, 2019

As a globally known cyclist and endurance athlete, Lance Armstrong remains passionate about the benefits of an active lifestyle and intends to share this passion through his service and dedication to Wish for Wheels and the youth they serve. More →