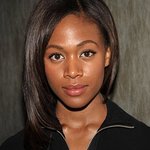 Nicole Beharie is best known for her roles in American Violet with Alfre Woodard, and most recently The Express. She’s a passionate philanthropist using her education as a Julliard graduate to give other children a voice to express themselves and tell their stories through the arts and other activities with ASTEP (Artists Striving To End Poverty).

ASTEP is an organization that uses the arts as a tool to empower young people with creativity, knowledge, and a strong sense of self-esteem, factors which help them advance their lives and communities. ASTEP provides artists with opportunities to connect with global youths, allowing them to use their gifts to create meaningful and effective change for young people in need.

Look To The Stars recently had the chance to talk to Nicole about her work with ASTEP.

Tell us a little about the ASTEP organization?

We have camps in India, South Africa, Florida, and I believe they are trying to open one in Ohio now. It’s basically a bunch of artists working with kids, and it initially started through a guy by the name of Maricio Selgato at Julliard. He gets these artists together and we do camps or projects. We also work with other organizations, especially when the camps are overseas – this fall I went to South Africa and worked with ASTEP and another camp called Global Camp South Africa with the South African Aids and HIV organizations. There were kids from the ages of 7- 16 doing theatre, and allowing them to tell their stories. We had theatre classes for an entire month there, so it was pretty hectic to have 200 kids.

The camps are all over and every camp has a different feel.The one in India is an orphanage for blind girls; I haven’t been to that one yet. This summer I’m going to Tampa, Florida.

In working with this organization, what improvement have you seen?

Working with artists that we’ve seen in productions, everyone gets the opportunity to stretch and expect more and genuinely find more within themselves and the other person. Especially the kids, a lot of the kids in South Africa are coming from impoverished neighborhoods where their parents are struggling or their parents have all died because of HIV or AIDS, and a lot of them have been abused. So this is really a opportunity for them to have a voice. For example, there was this one little girl who had never spoke before… ever. I was working with her and talking to her and doing really embarrassing things myself – I would do anything. I would roll around on the ground, I’d make fun of myself. By the end of the whole thing we had a production, we had a small showcase at the end and she sang a solo.

It was really awesome; everyone knows that so many amazing things happened. I think the difficult thing was the parting at the end. After giving them all this encouragement and then saying ok take it home with you. I want you to maintain it. We do try and give them tools to do so like…a book, journal, or something to be able to reflect upon. I gave my girls at least a month worth of activities to do once they got home, so they can continue in a positive way.

For other young females whom want to get involved in volunteering, what would be a good place to start?

Decide what you care about. What would you really like to invest your time and money in? You don’t have to get involved and then feel funny and obligated. It definitely has to come from the heart. The other thing is go online once you think you know what’s important to you. Even if you don’t find something right away, go online and read some stories, read the newspaper, see what’s going on in your neighborhood if you don’t want to fly half way around the world. I think there are so many organizations that are burning for volunteers. I also feel because of the economic situation right now we’re getting far fewer volunteers. People don’t really have time. I think this is the time when we really need to be volunteering, because everyone is feeling it a little bit. If you feel like it’s going to cost you too much, go to your nearest hospital and read to people, there’s lots of opportunities.

Were you raised to give back, or was there a certain event in your life that made you want to start giving back?

The truth is even though my mother and I don’t get along very well, she had it infused in us growing up every season that we’d give all of our old clothes away and old books. During Thanksgiving we went and fed the homeless, and at Christmas we gave money to the church. When I was in middle school we would sing at the hospitals. So the things we did I always just thought of as fun and having a good time. I’m a performer now, so any opportunity to perform was a great time. I didn’t realize I was doing anything any different than anyone else. As I got older I kind of stuck with it throughout college and continued every Sunday to do something with an organization. Now that I’m working, there’s a little less free time to do that. But, I try to make it something I at least do twice a year, and if I can’t do that then I just run around the corner to the hospital.

Do you think that young women in Hollywood are doing enough to raise awareness about the issues that are going on in our world?

No. I feel like the older women are doing it. The younger women feel like its novel. It’s a novel idea, kind of cool. I don’t think so. I feel like we should spend a little bit more time talking about those things.

What would you like to see change about the world when it comes to charity work?

I think that we should get tax deductions. I think that will make more people want to volunteer. I really believe that makes since.

What have you learned personally from giving back?

There’s no better feeling. It’s like cutting the grass – an instant satisfaction. Sometimes you get that, sometimes you don’t. Sometimes you feel like people aren’t appreciating it. We did this thing 2 years in the East Village. It was a home where people had HIV and AIDS, and this woman lost her sight. We did poems and talked with them. We asked people to get up and tell their story, and she just told this poem about how she lost her sight and now she had an audience – one could feel the joy and relief she had in telling this story. She had wanted to tell this story. To give people that opportunity and to encourage them and let them know that that’s more important than who some movie star is dating. To be able to tell others to protect themselves against whatever the situation is.

What do you want to leave the people with when it comes to ASTEP?

You don’t have to be trained artists – anyone can come in and their excepted. Everyone’s input is taken. It’s a grassroots type of thing. There were four of us going to the South Africa camp. We planned what we were going to teach, things changed accordingly when we met the kids. Basically, everyone is accepted and valued. It doesn’t really cost you anything at all. You get to travel and meet other people… and I know I definitely made some life long friends.

Look To The Stars would like to thank Nicole Beharie for taking the time to talk to us. To find out more about ASTEP, visit the official website.